I’ve really been thinking lately about how my professional career has developed over the years.

It’s certainly been a rollercoaster!

My journey didn’t start like most ‘typical’ journeys but I honestly wouldn’t have it any other way.

When I finished school I started my first few weeks in college only to have to defer for the year. Devastated doesn’t cover how I felt. I was bitter, angry, and, at the time, I couldn’t understand why it was happening to me.

I then started working full time at the age of 19. At first I got a promotional job through contacts I made in a pageant a few months back. Then my friend referred me for a job in a furniture store. I think that was the first time I found out how gruelling business can be.

Fast forward a couple of months later and I was offered a job in a phone store. It came at a great time because I was finally starting college and I needed something part time and closer to home. I was offered this job because the year previous I was doing promotions there and I stayed in contact with the team. That job taught me all about teamwork and how to work with an engaged team.

Eventually, almost a year and a half later I became complacent. I wasn’t really challenged anymore and my business mind wanted more responsibility. So I applied for a part time supervisor role in a fashion store. I was incredibly excited because I’ve always loved fashion and it was one of my dreams to work in a fashion store, to be able to put outfits together and get creative. That job taught me how to take control of my own time and say no when it was all getting too much.

I then left the supervisor role because it started to affect my studies. I was working way more than I should have been at the time and so I decided that for that year I would not work and just focus on college.

That didn’t exactly last very long. I applied for a temp Christmas role in another fashion store because I was hungry to get out there and work again. It’s just in my nature. I need some amount of work to stay sane.

I really loved that job. I was kept on permanently after Christmas and my contract was renewed. But this time, I was able to negotiate. I knew my limit because of my previous experiences so I was able to tailor work to fit into my time instead of making my time fit into work (if that makes sense). That job taught me the importance of training and constantly being engaged. They really valued their people, although some might disagree. But it’s all about seeing the bigger picture after all. I progressed in that job and again was able to tailor it to suit my lifestyle.

While I was working there, I was offered another weekend/evening job, again through contacts and relationships made. It was coming into summer time so I said yes. I figured I would do that for a while just to pass the time then leave when I started my final year. That was the first time I had a taste of hospitality.

I left the fashion store and stayed on in the hospitality job and moved up a role. I loved it. It was exactly what I needed at the time. Flexible, creative, exciting, different, engaging. Plus I was able to lead a small team.

I stayed there until I finished college. I left for about 3 months to do an internship in a finance firm only to come back into a higher role with more responsibility for about a year.

I was enjoying life. It had elements of exactly what I wanted but I soon became complacent again. There were a lot of factors that really affected me being in that role so I eventually decided to do something about it and look elsewhere. I wasn’t growing, not at the speed I wanted to be. But I learned a hell of a lot from being there, which I would never regret.

I then started with a popular radio station on their promotions team. Originally, I applied for a different role only to find out it was taken. I took the job anyway, even though it was a couple of steps down, because I felt I needed a time of reflection anyway to figure out what I actually wanted. I also had plans to go back to college and get my masters.

I didn’t last very long in the job for many reasons. Primarily though, it was because it wasn’t challenging enough. I’m still trying to figure out whether I learned anything from it or was it just a time filler for me.

In the midst of this, I had been offered a place on the full time masters programme for marketing in Trinity College Dublin. But, then I was offered a position in a major bank. I was hmming and hawing for a while about what to do because the job was in no way marketing related.

I realised that there were elements I really liked about that role so I decided to get in touch with the college to see if I can change to the part time masters in digital marketing strategy. I received a reply to say that I had been changed to part time. I took that as a sign.

So I accepted the role and started my journey in banking. It was certainly tough working full time and studying part time, especially starting the two together. And it’s still tough. This job taught me to never be afraid to seek help and to never doubt people.

So this brings me to the present day. I’ve recently started a job where I can say that I’m doing something I’m actually passionate about.

You’re probably wondering what the hell this blog is about and you’re probably like ‘Corina, just get to the point’. But I promise there’s something behind it.

You see, when someone has had numerous jobs it’s frowned upon. ‘Oh you got another job’ or ‘jese you moved again’. But honestly, going through all of that has taught me so much life experience that it would normally take someone else years and years to learn.

So my advice to the young professional.

– Don’t be afraid to explore opportunities when they come knocking.

– Don’t be afraid to approach people who you think will help you or guide you.

– Don’t be afraid to listen to your gut when it’s full on telling you to do something.

– Don’t ever think that you will never speak to that person again. You never know when you’ll need them in your life.

– Don’t ever be complacent and not do something about it. It’s probably one of the most unhealthiest things ever.

– Don’t rush into things just because, explore things first then make up your mind. Listen to those around you, but most importantly yourself. We sometimes think we make the wrong the decisions but 9 times out of 10 we actually make the right ones.

– Don’t let titles get in the way of your confidence. If you want to reach out to that director and ask to go for coffee, then do it. Remember that titles are only black & white. There’s real people behind those titles who more than likely have the same fears and emotions as you.

– Don’t ever regret anything. Always seek a lesson from something that didn’t exactly go to plan.

– Do be yourself, change because you’re growing and you’re learning, not because someone or something is making you change.

Do you have any advice for a young professional? Is there something that has really stood out for you in your career? I’d love to hear your experiences 🙂

This site uses Akismet to reduce spam. Learn how your comment data is processed. 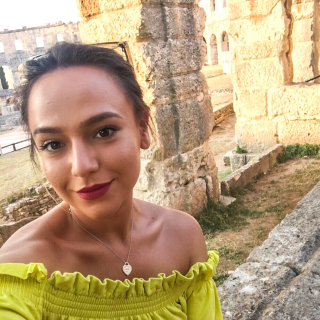 Just your average woman grazing through life trying to find some inspiration in anything and everything. Trying to keep it as real as possible because I know the online world is full of over edited and over glamourised images. I've always been into fashion and beauty, so I thought I would share my finds and knowledge I've picked up along the way. As well as this, the past few years have been a bit of a journey for me and I've really invested in who I am as a person. This lead me down a path of self-improvement which has done me a world of good. So expect to see content on fashion, beauty, self-improvement, and some inspirational everyday life posts.